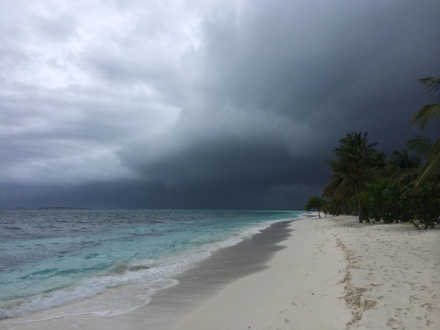 How amazing is mother nature!
We sat at our covered deck, sipped hot coffee and watched the rainstorm pass over us pouring blessings and happiness.

During all this, it was not cold, so we just sat in our bikinis and watched everything unfold – wind blowing the water and trees around. Everyone was tucked into their villas – but we feel lucky to experience this weather variety. 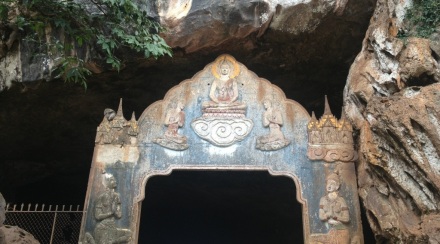 After an hour and half ride to Phangnga province, we took a long tail boat to the mangroves and the James Bond island.The landscape of the mangroves and surrounding islands were so captivating. The waters are murky and unfortunately not clean; swimming plastic bottles are common scene.

We took a canoe ride in and out of the limestone caves, inlets… our canoe driver was a trip – he made the trip memorable and showed us the small walking fish. We barely know few words of Thai, he was surprised that we even spoke any! 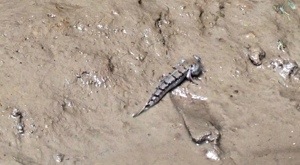 James Bond island, originally named Tapoo, is the one where they filmed ‘The Man with Golden Gun’ in 1974. It was too crowded as expected but worth seeing while in the area. They have put shops on the island detracting from its natural beauty. 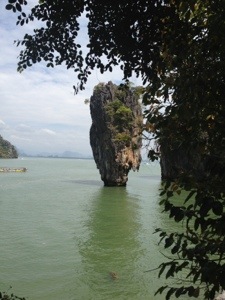 In contrast, we drove to the Reclining Buddha Wat (more than 300 years old)… The monkeys that live above the cave and up the mountain greet you. They are docile and mainly want to eat food and be curious. The door is adorned; the huge cave is a refuge from the heat and outside worries. Hard to meditate amongst the noisy tourists, but hard not to stare at the 15 meter reclining Buddha and feel serenity wash over you. Trivialities of our lives past before us…